A NEW ERA KICKS OFF! Roy of the Rovers, the classic British children’s football hero rebooted for the 21st century!  An exciting new series of middle grade fiction back to back with comics.

NEW Rocky of the Rovers

Rocky is the sixth and historic book in the brand new series of illustrated middle grade fiction titles starring Roy of the Rovers, the classic British children’s football hero rebooted for the 21st century This time, it’s all about Rocky, Roy’s football-mad younger sister!

A struggling student and brilliant footballer, Rocky Race is many things, but to most people she’s just Roy Race’s little sister. It’s not much fun – especially as Melchester Rovers head to the League Cup Final.

Rocky’s sick of everyone knowing her through Roy, she’s had enough of school, and she’s even started having panic attacks.

Roy and Rocky of the Rovers Writing Kit.

A set of eight activities designed to engage football fans with different aspects of writing using passion for the game as a way in.  Free download from here.

Catch up with my Facebook Live chat on https://www.facebook.com/RoyoftheRoversOfficial/ here when I talked about my first Roy of the Rovers book, Scouted.

Read about Roy’s fell running from the latest edition of The Fellrunner, illustrated by Lisa Henke here.

Originally published in The Fellrunner, the magazine of the Fell Runners Association (issue #126, spring 2020).  Thank you for letting us share it.

My family have been proud members of the Fell Runners Association for a number of years.  Find out more about what they do and how to join them here.

“Just finished @royoftheroversbook 1 by@tompalmerauthorA wonderful book about pursuing your dreams whatever your circumstances. I love how Tom covers football alongside real life issues that some of our children face today. #welldone” @emmasuffield School Librarian of the Year 2018 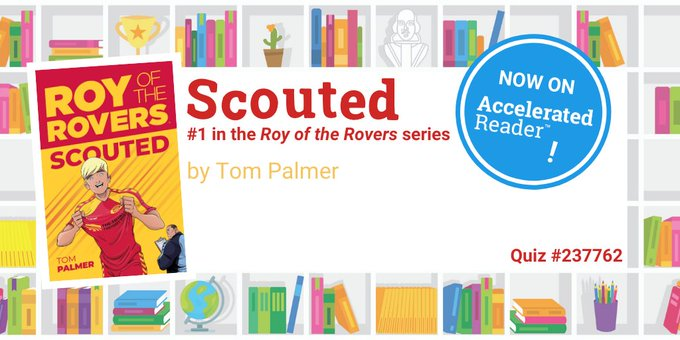 Powerpoint – Roy has to fit his school life and training around acting as young carer for his dad whilst his mum works to support the family.  This powerpoint explores the role of young carers. Suitable for literacy / phse here.

If any of your pupils have read all the books so far, we’ll send you free signed certificates here

Sharp-shooter Rocky is testing her brother Roy’s goal-keeping skills. Can you add a crowd or maybe some more players and colour them all in here?

A picture of Roy to colour in and design a new football kit for Melchester Rovers here.

I was thrilled to work again with the National Literacy Trust, Rebellion and The Football Association to write a free real time story set at the Women’s Football World Cup.   Readers followed the adventures of Rocky Race, her brother Roy and her football coach Ffion travelling around France to cheer on the Lionesses.  Catch up on the full 2019 story here

Times are tough for Melchester Rovers. Languishing at the bottom of League Two, the once-proud powerhouse of British football is out of money and out of luck.  The epic footballing saga begins here!

Sixteen-year-old Roy Race always dreamt of playing up front for Rovers. Oozing with natural talent and possessing a powerful left foot, Roy may just be the answer to all of Melchester’s prayers.

Can Roy break into the Rovers first team and bring back the glory days of old? Or will the pressure of problems on and off the pitch prove too much for the young prospect?

“Scouted has everything that a football fan needs… match day action, local club rivalry, modern football politics, trials, crunching tackles, tricks, misses and goals. But this is much more than a book about the beautiful game, because it also has everything that today’s children need as they grow up. It is jam-packed with positive role models, girls involvement in Women’s Football, respect, mental well-being, good work ethic, education and aspiration. Tom Palmer expertly weaves all of this together with friendship, family and a great little plot.”   Books for Topics

The second installment of the brand new series of illustrated middle grade fiction titles starring Roy of the Rovers, the classic British children’s football hero rebooted for the 21st century!

Roy Race has it all: all the skill, all the talent, and all the eyes on him now he’s broken into the Melchester Rovers first team at only 16 years old.

Except, of course, there’s more to life than football. His dad’s in a wheelchair and needs looking after, his mum is working all hours, and his sister? His sister wants to play football too, and she won’t leave Roy alone until he helps her do something about it…

“Can’t endorse these books enough. They’ve given a legend a brilliant new lease of life and are absolutely PACKED with heart. ” Phil Earle

Crunch time for Rovers: the end of the season is here, the club is in deep trouble, and it’s down to Roy to bring a bit of hope back to the Melchester faithful.  The new era of Roy of the Rovers continues!

“Packs a lot of punch in its short and simple to read pages… It captures the feel of playing and having a passion for football at an early age very well. More than that it sets out the stall of the new Roy Race, his family background, his friends and enemies, where he lives and his work ethic.” – Comic Scene Magazine

This fourth volume of the smash-hit phenomenon reboot sees the start of an all-new second season!

Roy Race is living the dream. After a whirlwind season that saw him become centre forward for his beloved Melchester Rovers and score a bagful of goals, helping them secure promotion into League One, he’s now recognised as one of the best young footballers in the country.

But something strange is afoot. As Rovers head off on a pre-season tour, Roy’s treated differently, and kept apart from the team. What’s going on, and why are Rovers bringing in new players?  With his family life hitting a rough patch and everything in flux at Mel Park, it’s time for Roy of the Rovers to fight for his team, his family – and his career in football…    Read chapter 1 here

“I give it 5,000,000 stars! I recommend it to 9+ football fans but also non-football fans. I’m not a football fan but I still really enjoyed reading this book. Look out for the graphic novels and the rest of the series. Amazing!” – The Book Brothers

Book 8 From the Ashes

Roy Race has the world at his feet. He’s playing Premier League football, earning plenty of money, has a great girlfriend, and things are even looking up at home.

The only problem is, he’s not playing for Melchester Rovers. And the club he loves, the club he has supported all his life, the club that, until recently, he played for, is falling apart. Mel Park lies in ruins.

Dodgy backroom deals brought Rovers low, and now Roy is determined to find a way back to his old club – and to lift it out of the mess it’s in. But he might have to break a few rules to do it…

“Football-lovers will love the description of on-pitch action which is pacy yet satisfyingly detailed. This is a book that I am looking forward to putting on the shelves at school – I know already that it will be a popular title amongst our football-loving children (not just boys!).”  That Boy Can Teach

Writing Roy of the Rovers

Millions of girls and boys dream about being their favourite football player and being scouted and playing for their favourite team. I had that dream. Sadly it didn’t come true for me.

But, being scouted and succeeding in my trial to write Roy of the Rovers fiction is a dream that has come true. There is no other fictional footballer I would rather be and write. And I intend to write these books with the same passion and commitment  Roy shows when he pulls on the red and yellow of Melchester Rovers!

Roy of the Rovers Schools

Keep in touch with how the series is progressing and get a newsletter reminder when it is out, email “Roy Reminder” to admin@tompalmer.co.uk .

“After the War: Auschwitz to Ambleside” : Roundtable with author Tom Palmer

Share on FacebookShare on TwitterShare on Linked InShare by Email

Find out more or adjust your settings.