When I was researching my new book – After the War – I went to Kendal Library to read the Westmorland Gazette microfilms for 1945. It was there that I read about a group of Jewish children who were arriving from Europe to stay at the Calgarth Estate on Windermere.

This was part of my research into a story that many Cumbrians know very well. The Windermere Boys.

On 14th August 1945 ten stripped-out Stirling Bombers touched down at Crosby-on-Eden airfield. Thirty children emerged from each plane. They were given something to eat and drink, then driven – in buses and army trucks – to the shores of Windermere. To the Calgarth Estate where, during the war, the workers at the White Cross Bay flying boat factory had lived.

But the war was won and most of the workers had gone, although a community continued to live on the estate until the late 1950s.

The 300 children were Jewish refugees. Aged from infants to teenagers, mostly orphaned, they had come directly from the concentration camps of central Europe to Cumbria. 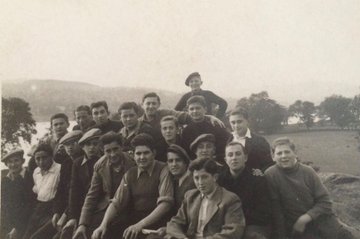 It was dark when they arrived, so they had little idea of this place that they had come to: Windermere.

What they saw in the morning astonished them. They have said since it was like coming from hell to heaven. Some refer to it as Wondermere.

You might have seen the BBC film – The Windermere Children – earlier this year.

Before the film was released, I heard the story on Radio 4’s Open Country and was immediately struck by how the Boys enthused about their relationship with the local people. That was something that the film – with so much to cover in only 90 minutes – didn’t explore.

But I was keen to explore it. For three reasons.

One. The director of the Lake District Holocaust Project, Trevor Avery, told me how the families of Calgarth welcomed the children. The book would not have been possible without his support and the work he has done at the Windermere Library exhibition, From Auschwitz to Ambleside.

Two. The Boys talking about the welcome they had on Open Country and on the audio files you can listen to on the Lake District Holocaust Project website (ldhp.org.uk).

Three. When I visited the exhibition at Windermere Library, I met Joyce and her niece, Marion. We got talking. Their openness and friendliness reminded me of how some of the Boys talked about their welcome from locals.

I have written a book about the Windermere Boys. For children. It is called After the War. It is a story that must be told again and again and through different media; and a story that Cumbria must be very proud of. First for taking the children in in 1945. Second, for devoting a whole floor of a library to ensure this story reaches future generations.

The children had suffered ghettos, concentration camps, death marches and seen family members murdered. But they were given refuge at Windermere. Lessons in English. Exercise to rebuild their strength. And they were fed as well as they could be in rationing Britain.

There is a story about how the locals gathered hundreds of tomatoes to give the children each a bowl of tomato soup one evening. That story is in the book. As are many examples of Cumbrian compassion.

Research in a book like this is vital. Talking to people who were there when the events happened. And reading the Westmorland Gazette was just as vital. I had this idea for a scene where one of the Boys would teach himself English by reading the local newspaper. A headline stuck with me and I had my character read it out to his friends:

It was exciting to be reading the exact issue of the newspaper that no doubt some of Boys would have read.

Over several months, I visited the settings of the story. The Lakes School is on the site of Calgarth now. The school kindly allowed me to watch one of the Boys – Arek Hersh – speaking with the students.

But it was another school in the area where I realised I was writing something important for the children of Cumbria and beyond.

I have a good relationship with Grasmere Primary School. They helped me when I published Armistice Runner, a story of fell running, set in Cumbria in 1918 and 2018, featuring a character based loosely on Skelwith Bridge fell runner, Ernest Dalzell.

The children read After the War before publication and their reaction and advice had a profound impression on me and the book. As did their compassion. The way they took to the story and empathised with the Jewish refugee children who arrived here 75 years ago was one of the most moving part so of writing After the War. If I wrote After the War for anyone, I wrote it for the children of Grasmere Primary School.

The book trailer for 'After the War'. Huge thanks to @BarringtonStoke for creating it:
t.co/1FFFqR1xW9 ... See MoreSee Less

After the War - the trailer

Master storyteller Tom Palmer returns with a deeply moving and beautifully told novel of friendship and belonging, inspired by the incredible true story of t...

Share on FacebookShare on TwitterShare on Linked InShare by Email

Find out more or adjust your settings.